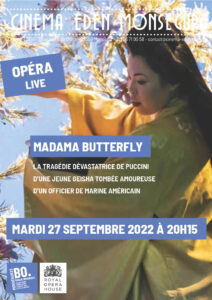 Cio-Cio-San, the young Japanese bride of American naval officer Lieutenant Pinkerton, finds her romantic idyll shattered when he deserts her shortly after their marriage. She lives in hope that one day he will return. Three years later, Cio-Cio-San and her son, Dolore, see Pinkerton’s ship in the harbour. She excitedly awaits his visit – but when Pinkerton and his American wife Kate arrive and learn about Dolore's existence, they ask to take the boy away, and raise him in America. Cio-Cio-San bids her son farewell and takes her own life.

Slogan : Puccini’s devastating tragedy about a young geisha who falls in love with an American naval officer.
Genres : Opéra